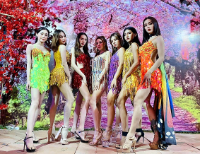 Sad times for the Têt

By Pulci Gorgon,
February 7, 2021 in News from the Vietnamese scene